Treble boosters - simultaneously boosting gain and the high end of the tonal spectrum, whilst attenuating lower frequencies - have always been an integral part of Brian May's signal path, from Queen's earliest recordings to his current stadium-sized setup and the 2019 "New Horizons" single, and are an essential tool for any guitarist wishing to achieve a focused, cutting, overdriven sound, with clear note definition and string clarity.

The BMG TREBLE BOOSTER CLASSIC is a elegant and compact, multi-mode foot pedal designed by British electronics guru, Nigel Knight of Knight Audio Technologies, that combines three separate, uniquely voiced circuits that faithfully replicate Dr. May's most recognisable tones from the 70’s, 80’s and 90’s, providing modern guitarists with the opportunity to select the distinctive sound of their favourite May-era, at the flick of a switch and the turn of a level control, either to emulate the maestro or to explore their own new musical horizons.

Thanks to the unique access provided by his long term tech, Pete Malandrone, the sound representing each decade has been meticulously modelled after the actual vintage equipment used by Brian May during each period of his stellar career - his dynamic, germanium Dallas Rangemaster from the 1970's, the orange label, silicon BC149 transistor powered booster installed on his pedal board throughout the 80's, and an original 1998 Greg Fryer strap booster. Every possible technical nuance of these contemporaneous processors has been analysed in order to recreate the original circuitry and realise an astonishingly authentic reproduction of their tonal responses and output profiles.

Proudly made in England, the Treble Booster Classic is built into a compact, rugged, solid die-cast aluminium case and features a heavy-duty 3PDT footswitch for reliable, sustained use, true-bypass switching with LED status indicator, internal battery compartment, 9VDC socket for pedal-board power supplies, high quality Neutrik 3 pole jack sockets and a level control topped with a RS-style aluminium knob, so there is no mistaking the heritage of the tones therein. 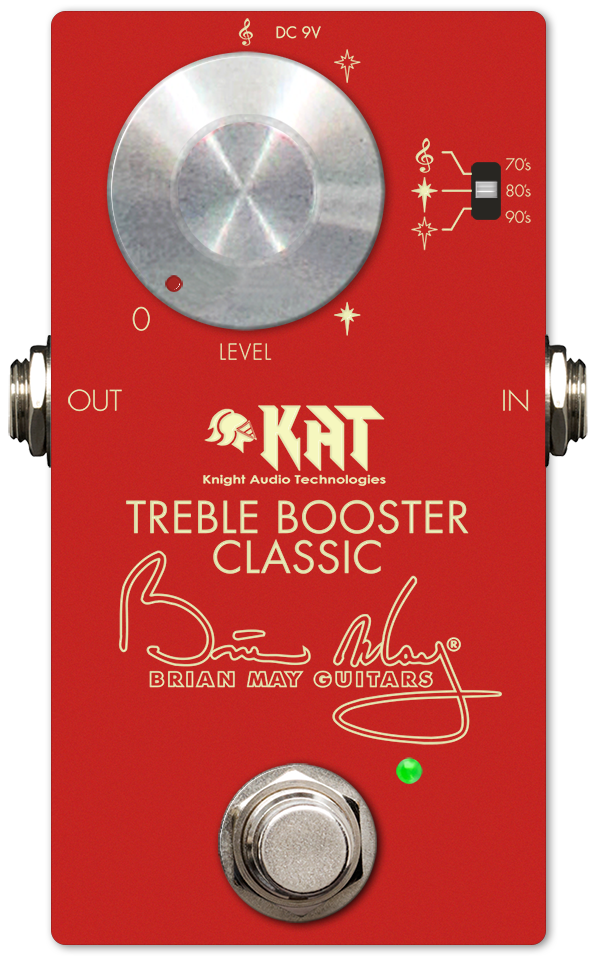 The BMG Treble Booster Classic is easy to set up and use.

With power supplied by an internal 9 volt battery, or via the 9VDC socket (fully isolated mains adapter NOT supplied), plug your guitar into the ‘IN’ jack and plug the ‘OUT’ jack into your amplifier.

It is essential that the Treble Booster Classic is the first unit in line after the guitar in the signal chain (if you are using a radio system, then the TBC must sit between the guitar and the transmitter pack). For a thorough explanation of the science behind this, please see the section below.

Select the era that represents the sound you wish to use via the slide switch on the top right-hand side.

The three position switch has three decades - 70's, 80's and 90's - marked on the right hand side with three corresponding icons - treble clef, solid star and outlined star - on the left hand side. These icons match the icons printed around the LEVEL control which indicate the point where the level (or gain) of the Treble Booster Classic matches that of the original vintage unit.

Please note that the level pot in this device also acts upon the bias of the TBC transistor stage and therefore has a DC component present, in addition to the usual AC (signal) component. This will result in the LEVEL control exhibiting a certain amount of noise (a "scratchy" sound) as it is rotated with the Treble Booster Classic switched in circuit. This is perfectly normal for the design of this unit and is not a sign of any fault.

Obviously, these settings do not have to be strictly adhered to; they are simply guides to indicate at which point you will be enjoying a response exactly the same as Brian did in the corresponding era. The BMG Treble Booster Classic has more gain available than the original Dallas Rangemaster and Strap TB so you can adjust the level to suit your own sound and style or amplifier requirements.